Thank you to one and all for investing your time, donations and personal commitment to help make our Kick The Pick Fundraiser, held on March 9, 2019 at the Hilltop AA in Oakford, Pennsylvania such a heartfelt evening in so many ways.  The evening was difficult for us since David was in the hospital but the love and support we felt from all who attended helped us immensely and lifted our spirits.   A 50/50, door prizes and over 50 baskets were donated by local businesses and individuals and were raffled off making happy winners of so many who attended!   Our fabulous DJ, Rich, helped us dance the night away and smile for awhile!

Our heartfelt appreciation to all who made this such a successful event!

Please continue to pray for David’s recovery.   The road ahead may be long but he is making progress one day at a time.

Thanks to Texas Roadhouse and everyone who came out to support our June 21, 2018 fundraiser!  Your support means so much to us and we are grateful for all of our outstanding volunteers and all those who stepped in to helped.  The support from Texas Roadhouse employees, from hostesses and hosts to all the cooks and servers, was just fabulous! Great food was enjoyed by all and the recipients of our fabulous door prizes were real winners!

Thank you for your continued support!

Thanks to you the 2018 Million Dollar Bike Ride was another great success!  This annual event, sponsored by the Penn Medicine Orphan Disease Center, uses all proceeds raised by participants to directly fund life-saving rare disease research.  Niemann Pick Type C is just one of many rare diseases that receives research support from Penn Medicine.  Team NPC had a great day and a great turn out!  Thanks to all who participated and supported us in raising funds for continued Niemann Pick Type C research.  Our hope is one day there will be a cure! 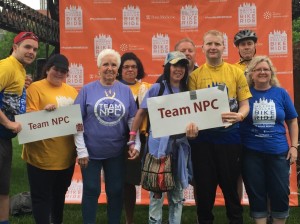 In association with World Rare Disease Day, we held our annual fundraiser on Saturday, February 24, 2018 at Hilltop AA in Oakford, Pa. Our heartfelt thanks must go to everyone who donated baskets, gifts, valuable time and great effort to make our 3rd Annual Fundraiser such a success! Local businesses and individuals were so generous in their support and donations and we couldn’t have done it without you! The evening included dinner, dancing and a visit from Congressman Brian Fitzpatrick.

Together we are helping spread awareness and education as well as raising funds to go towards finding a cure for Niemann Pick Type C (NPC) Disease.

We are so excited to share the news of another successful Million Dollar Bike Ride!  The event, sponsored by the Penn Medicine Orphan Disease Center, uses all proceeds raised by participants to directly fund life-saving rare disease research.  Team NPC had a great day and a great turn out!   Thanks to all who participated and supported us in raising funds for Niemann Pick Type C research.

You may continue to DONATE HERE to help us meet the Team NPC Goal!

We look forward to seeing you again next year!

In conjunction with World Rare Disease Day on February 28, we held our 2nd Annual Beef & Beer on March 4, 2017 at the Newportville Fire House.  The evening was a huge success with music by the band Defying Gravity and DJ Rich.   Over 40 baskets donated by local businesses and individuals were raffled off and a visit by Congressman Brian Fitzpatrick added to the success of the evening.

Our heartfelt appreciation to all who made this such a successful event!

Many thanks to the Violi Family and The Palz Tap House for a remarkable fundraising event.  The night was filled with family, friends and some surprise guests!   We appreciate all the support from The Palz Tap House and all who attended.   We are grateful for our new found friends, The Lang Family!

A Surprise Meeting for Two Families with Much in Common

Ed and Jean Lang had two sons, Daniel and Douglas, who were identified over 40 years ago with the symptoms of Niemann Pick. At the time it wasn’t a disease with a name and was called Lang’s Disease until a formal name of Niemann Pick Type D was given to their sons. Daniel and Douglas lost their battle with this disease at ages 11 and 12, respectively. Through the years the Langs dealt with the loss of not one, but both of their sons. Their daughter, Donna, now lives in North Carolina with her husband Steve and they were visiting her parents along with 2 of their sons on that day when Ed returned from the hospital.

When Ed arrived home that day he shared the story of meeting the Coppola’s neighbor and about the fundraiser to be held later that week for the Andrew Coppola Foundation.   The entire family attended the fundraiser at The Palz Tap House on August 16, 2016.   It was such a blessing for everyone to meet the Langs and especially for the Coppolas to know that there was another family right in their local area who truly understood what they are going through.  It was truly a special evening and the start of an encouraging friendship for both families.

Pictured below are the Coppola and Lang families enjoying a fun evening at The Palz Tap House!

Thanks to all for the impressive results from the Texas Roadhouse fundraiser!  The management at the Texas Roadhouse in Bensalem, Pennsylvania informed us that it was the second best fundraising event the restaurant has had at that location to date!  Your support means so much to us and we are grateful for our outstanding volunteers and all those who helped.

The Million Dollar Bike Ride was held on May 7, 2016 and is the only fundraiser held in the United States that matches donations dollar for dollar for “Orphan” diseases like Niemann-Pick type C.

Team NPC is a group of dedicated families and friends who all know or love someone affected by Niemann-Pick type C disease.  Along with the researchers studying the disease, we are raising funds for research that will lead to a treatment or cure for this devastating and fatal neurodegenerative disease.  Our team participated again in 2016 in the Million Dollar Bike Ride and has funded four research projects since 2014 and 2015 successfully raising $50,000 each year.  These funds have been matched by the University of Pennsylvania to $100,000 each year in 2014 and 2015.  Totals for 2016 will be posted as soon as they are available.